The Philippines is a land of contrasts. It’s still the third-world, despite what is considered a rapidly growing economy. Plenty who drive Ferraris and Porches, but there remain those who live on the street or scrounge through garbage looking for something to sell, so plenty of opportunity for Philippines charity. Decent Australian men in Australian Filipina relationships naturally want to do something to make it better, but is there a right way and a wrong way to go about this? 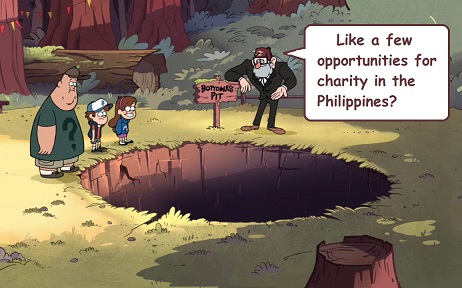 I’ve long been a follower of the man from Galilee, and despite being also a believer in working hard and taking responsibility for your lot in life, there are many who had an unfairly rough start in life and it’s our duty to help out where we can. Loving our neighbor means not turning our backs when we have the opportunity to be kind and to make up inequities. Our own blessings should be shared, and if all of those of us who do OK in life and have a bit left over could share that with those who are not so fortunate, there would be no poverty in the world.

And hence one of the problems. With kids, you need to accept that they did nothing to create their situation through laziness and/or poor decisions. They were born into their current situation, and if you can help them then you most certainly should. We have a house full of kids we didn’t make ourselves, and I think we always will. And we have other kids that don’t live here but we help with education expenses.

It all really stems around who you should help. From being here as long as we have, this has been the lesson. Whenever someone is here and willing to help, there is always someone there willing to take advantage. And as per usual, the problem starts when the Australian man, who is just an ordinary man in Australia, forgets that here he isn’t see as that ordinary man anymore. Here he will always be the rich man, and those in need will be very aware of this.

And as I said above, kids by themselves won’t take advantage of you. They also did nothing to create the situation they found themselves born into. And not all, but many adults have made their own bed and really need to either lie in it or make some changes themselves. But many of them are only willing to take handouts and you may be only encouraging and supporting laziness and bad choices.

When we first moved here we found a charity funded by a UK-based international charity, and managed by an English fellow who wasn’t lacking in means himself. They took in homeless kids from the local dump site. These were scavengers who made their living scouring the garbage mountains and collecting what they could sell. Great bunch of kids, and we enjoyed visiting. And we were more than willing to make life better for them. Organised a medical and dental mission there, with a very kind doctor and equally kind dentist. And we had plans of getting them all new mattresses and bedding.

In both cases, the staff were quick to come back to us with costings for both medical/dental treatment and for bedding. But what they didn’t like was that we were prepared to bring THINGS (ie. doctors, medicine, bedding, and we would arrive laden with fresh fruit, etc). They wanted us to bring CASH and not ask any questions. The last time we visited, the kids all stayed upstairs and my poor wife was left ignored downstairs. So yes, we parted company after that.

And had a similar one with a charity that would go out and provide food for the hungry. They had purchased land, and were building a pretty nice centre, complete with their own residence included. Seemed like nice people. And I’m fairly sure the American gentlemen who was the public front was sincere, however it was obvious that donations didn’t necessarily end up where they were meant to go, and the feeding program was as cheap and un-nutritious as it could possibly be. Feed 100 people on probably less than P1,000.00. Everyone has a snack and that gives them a reason to smile for the cameras, and 100 people getting fed always sounds impressive. But one suspects the profits are going elsewhere, and this is the problem.

There are some good charitable institutions here, such as Don Bosco and of course Fr Shay Cullen and his PREDA organization in Olongapo. Fr Shay is one of my very few heros. My advice is to not give up on the idea, but to be careful and make sure your money goes where you want it to go. Watch out for charity scams and scammers.

If you know the situation and if you can manage it yourself, then you can be certain that your spending goes where it’s supposed to go. And as much as possible, try to help kids and young people rather than those who are less deserving and may have created their own problems themselves.

We have kids here. Six of them. We take care of them, feed them, send them to school and most importantly give them lots of love and guidance. If you are willing to do this, you will no doubt have relatives who are struggling and are willing to let their kids live with you to give them a better start in life than their parents could. This is as challenging as any child-rearing will ever be, of course. The kids may be difficult and unruly, and you have the issue of them possibly wanting to run back to their parents if you have a family dispute. So don’t expect the Brady Bunch. But we’ve never regretted it.

The other way is to support kids in their education. Could be relatives. Or in our case we have a handful of scholars in the province who can’t afford to continue their education. The cost to the average Australian is minimal, but it can make a massive difference.

I think the main issues are not only to avoid anyone pocketing your generosity by either paying for things yourself or relying on a relative you can absolutely trust.

The other issue is making sure you’re not seen as a soft touch, and ensuring a positive result. Because you can easily get burned-out and sick of the whole thing if you feel you’re being taken advantage of.

With something like education support? You need to insist on minimal grade averages, and on seeing school reports. Need to make sure that the kid isn’t skipping school and pocketing the money! We’ve had that happen years ago. Never again.

And if you have kids living with you? Make sure you don’t spoil them and make them think they’ve become fairy princesses in a castle. Watch their attitudes. If they arrived humble and kind, make sure they remain that way. Don’t be a soft touch, and ensure they never forget where they came from. Once you have a kid who’s showing off at school that they’re being dropped off in an expensive car and going on about the flash house they live in, and then talking down to your household helpers, you will know what I’m talking about here. Build bodies and minds, but ensure you build decent character too.

2 comments on “Traps with Philippines charity”