Filipinos and selfies. Filipinos and cellphones (mobile phones) in general! Filipinos are fairly sociable people by nature, as you would probably have worked out. Family and friends mean everything. What others think and see and know, this is life itself! Therefore mobile phone technology found a very willing audience here right from the start. 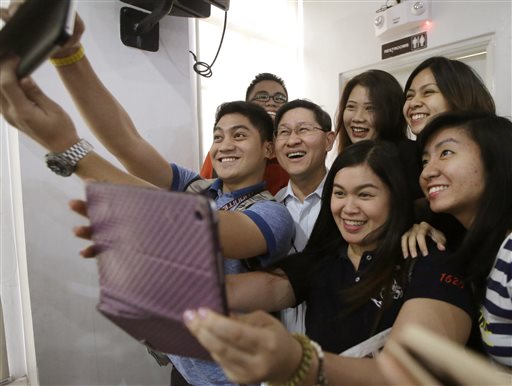 I can certainly remember in the 90’s how everyone was desperate for their own cellphone. There were Nokia’s, both genuine and fake, flooding into the country and millions of waiting hands. Markets had plenty of cheap accessories for changing the “box” or the button colours, plus cases and jangly bling things that hung off them. You could even get them “bedazzled” if you wanted. And the country soon became the texting capital of the world. Everyone was texting non-stop. There were even signs up telling people not to text whilst crossing the road, as people were getting bowled over by cars!

The next progression was the phone with the camera, and the dreaded Filipino selfie became everyone’s obsession and number-one pastime. Why just take a photo of something or someone interesting, when you could insert your own grinning face there too? This became worse again when smartphones and cheap phone plans offering Facebook access became easily available to the masses. Everything you did became an opportunity to share a photo with your 3,000 Facebook “friends”, hoping for many many “likes”.

Selfies and Social-Climbing in the Philippines

No one takes a selfie of themselves taking out the garbage or scrubbing the toilet. Selfies are all about impressing everyone else with how glamorous you are and what an exciting life you are leading…..even if it’s not quite true! Exaggeration…..even to the point of being tacky….is surprisingly tolerated.

As an Aussie, we have plenty of choice terms for those who try to bignote themselves. Getting caught pretending you owned something that you do not, or that you had more money, qualifications or influence than you actually have? I’m sure I could come up with about a dozen unflattering words for this. But surprisingly it doesn’t seem to quite work like that here, with people taking every opportunity to make it look like they have more wealth and are higher up the social ladder than they actually are. People take selfies in some fairly strange situations and all I can do is to roll my eyes and laugh.

We’ve seen people walking into expensive shops….posing in front of a counter….then going out again without buying anything. We’ve seen them standing in front of signs to super-expensive resorts getting photos, as though they were staying there. Jeremy showed a video to me taken by a friend of his of two flamboyant young chaps took selfies whilst leaning on her car…..while she was inside the car!

All fairly harmless, I suppose. Personally, I can think of few things less interesting than plonking my face into otherwise attractive scenes. I come from a generation where we took photos of things that we liked and people that we cared about. And we left it to others who cared about us to take the photos of us. And I tend to think that changing attitudes toward self-importance have either been fueled by selfies, or are the root cause of their popularity. I’ll continue to mainly take photos of my kids, because they mean more to me than any wish to show off my ugly mug.