Home › In the Philippines › Swings And Roundabouts – Exchange Rates

I remember the first time I visited the Philippines in 1988. The US dollar was the currency to have and it bought you about Php25. The Aussie, on the other hand, only got you Php18. Back in Australia, it was possible to buy US dollars, take them to the Philippines and exchange them for pesos and make a few bucks on the deal. That was nearly thirty years go when you had to take either cash or traveller’s cheques, or use a credit card in a bank to get a cash advance. 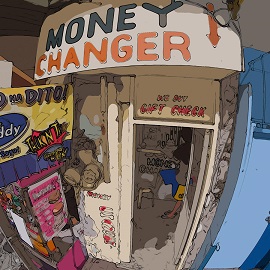 Credit card cash advances were a time gobbling nightmare, only did it once. Instead I used traveller’s cheques, but they were little better. I remember trying to exchange American Express travellers cheques in US dollar denominations, in Manila at the Amex main office in Makati. It was a fight to get them to pay me in US dollars; the clerk insisted that wasn’t possible and I would have to take local currency… at a ridiculous exchange rate. I argued the cheque said ‘US$’ and ‘US$’ is what she would pay me in! Took about an hour, but I finally left with a couple of Benjamin Franklins, which I took to my suki in Ermita and exchanged for Nino Acquino’s.

A few trips later I had stopped buying traveller’s cheques as they were more hassle than the were worth; I just took cash and made sure I took good care of it. I also stopped buying US$ in Sydney before leaving and just carried Aussie dollars; there was no longer any benefit to be had playing the exchange game and it was too easy to be caught out. It had happened in Bali in 1990, albeit in my favour. One day the Rupiah was worth half what it was the day before and I, and every other tourist with foreign currency left to exchange, made a killing. This is terrific but when it goes the other way, it sucks! In fact, it can suck big time even when it goes your way.

I Hate To Think About This

When I migrated to Cebu in 2002, the Aussie was buying around Php29. I bought a car, filled the house with stuff we needed and put some money into a business opportunity. Then I transferred some of my remaining funds and exchanged them for local currency. It made sense to have it on hand as at the time transfers were expensive and time consuming to arrange. The following year, the peso dived, the AUD$ shot up, along with the US$ and the GBPound and now you could get Php45 for every Aussie buck! If only I had waited!

In real terms, I had spent maybe AUD$20K and received Php580K. If I had done everything the following year I would have received Php900K, nearly double. Lucky for me I still had some money left in the bank back in Australia and I was getting paid in US$ every month so I guess overall I didn’t miss out. It’s just a bit of a kick in the guts thinking about what might have been. But there’s the lesson to be learned. Nobody has a crystal ball, nobody knows for certain what might or might not happen. Do your home work, give it your best guess and go for it. There’s never a perfect time to do anything and either moving to the Philippines or bringing your Filipina back home is no exception. As you can see from my experience over nearly 30 years with money, it’s all swings and roundabouts.