Home › In the Philippines › Not Waving, Drowning – Filipino beach culture

Jeff HarviePosted on 03/04/2016 Posted in In the Philippines

Most Filipinos live fairly close to the sea. With the exception of those ‘taga bukid’, mountain dwellers, most people live close enough to enjoy a family outing to the sea if they so choose. Given this it never ceases to amaze me how few Filipinos can swim. Apart from the pile of kids hanging out at the local wharf, forever frolicking in the water as the pump boats come and go, I have to admit I have spoken to many  Filipinos who confess they can’t swim, or at best are very poor swimmers. I suppose for many they are content to splash in the shallows and are too busy making a living to have time for recreational pursuits like swimming. My wife grew up less than 400 metres from the sea and couldn’t swim when I first met her. But I soon changed that. 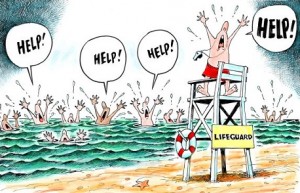 A Ton of Guts

Wanting to share the wonders of the underwater world with my new found love, I signed her up for an ‘Experience Scuba’ course and then joined her as her buddy. We didn’t get down very deep before a common problem among Filipinas arose. Her cute button nose made sealing her mask problematic and that made clearing her ears difficult and so she was unable to dive any deeper than 5 metres. No problem, we’ll stick to the shallow reef area… but then I was stung by a Hydroid and we had to get back to the boat and that was the end of that little adventure. I have to confess I was struck by her guts and determination to learn to dive, given she couldn’t swim a stroke!

On that same trip there was a tragic accident nearby when a pump boat full to the gunwales with people, pigs and all the paraphernalia that gets carted from island to island, sunk. In typical Filipino fashion it set sail against common sense and good judgment as the weather was picking up and going nasty very quickly. Once out of the shelter of the bay it was hit by a large wave on the beam and quickly broached, spilling 50 or more people into the sea. Most drowned. There were life jackets on board, but these home made bits of Styrofoam held between two layers of orange cotton type PFD’s are of little use when worn, let alone if stowed. The accident happened too quickly for anyone to don a life jacket and so few could swim it was always going to be a tragedy in the making.

Sadly the poor standard of water safety extends even to those supposedly charged with keeping others safe and alive around water. One day my wife suggested we take the family to a new ‘resort’ that boasted lots of swimming pools, slides and ‘cottages’ for hire. We found the place tucked in the hills south of Cebu and it seemed clean, well laid out and maintained. There were even Life Guards on duty, strolling around looking purposeful in their marked t-shirts. Then tragedy struck and a little boy had a near drowning experience. I saw the commotion and ran across to offer my help. A ‘life guard’ was carrying the unconscious boy in his arms, lying face up with his head lolling lower than his chest.

I immediately tried to stop the life guard and resuscitate the boy; at the very least turn him over and try and drain his lungs of any water. No, the life guard ignored me, pushed past and ran to a jeepney where the boy was placed flat on the floor and the vehicle sped off bouncing madly along the rough access road. The boy died en-route to hospital; something I know was completely avoidable had I been allowed to resuscitate him. I imagine he may have even been well enough to go back to playing in the water; I’ve experienced this before here in Australia.

Water is not a theme park, it is a very dangerous element that demands respect. But it is also a wonderful thing to enjoy. Can your loved ones swim? Do you know how to resuscitate near drowning victims? I was trained by the best in the Army, as a PADI Rescue Diver and as a member of the Royal Volunteer Coastal Patrol. Swimming is a life skill we should all possess and having first aid skills is a no-brainer.