The myth of the rich foreigner from Australia

The rich foreigner! An important topic to both overseas Filipinos and to their Australian spouses. In short, most of your relatives in the Philippines think you and your Australian husband are rich and have an endless supply of money. They also think it’s OK to share in this wealth freely. And if you’re part of an Australian Filipina relationship you need to learn to deal with it. 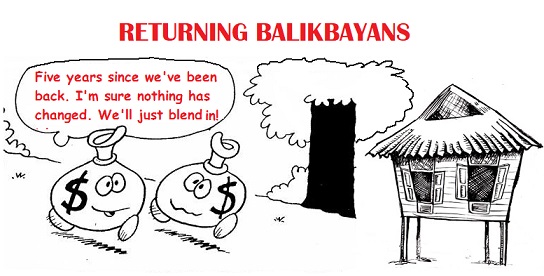 All foreigners are rich

There is a concept going around that everyone who lives in Australia is rich. The same myth applies to America and other foreign countries. Anyone who lives overseas has a money tree growing in the yard, and nothing is ever too much for them. They have everything, and of course they will share it with you. It’s only fair after all.

There is no understanding of the cost of living in Australia. No one could imagine you having to pay $300.00 or more per week in rent, or the cost of owning and running a car. A cappuccino costs you $4.00 to $5.00. A beer could cost you $7.00. Steak costs you $20.00 a kg at the supermarket. There are no cheap tricycle or jeepney rides. Yes, maybe you earn $1,000.00 a week, but it disappears fairly quickly. No one realizes that.

And there is this concept of being entitled to share in the good fortune of a relative. What’s mine is yours. They would and have always shared what they had with you, and given that you have more to share then of course the ball is in your court to be more generous. Fortune smiled on you, therefore it’s up to you to help out the family members and to spread that wealth.

Pasalubong is a Tagalog word which describes gifts and handouts that a returning rich foreigner or balikbayan (returning countryman) is expected to bring with them. And relatives will often descend on the house of the balikbayan relative expecting this. Children are sometimes encouraged to ask “Where is my gift?” I know! Gets on my nerves too! But if you get annoyed, you will end up with a room full of confused people.

This is one of those cultural differences. As an Australian it never occurs to you that you have an obligation to purchase gifts for everyone when you travel, but here it most certainly is. Even taking a trip to another town in the Philippines means purchasing things to distribute on your return. Snack foods such as pili nut candies, dried mangos, buku pie, chicharon, etc as well as caps, tshirts, ornaments, etc are the usual.

And it doesn’t end there. I’ve heard of cases of relatives going through the suitcase and just helping themselves, and of saying “I like that shirt. Can I have it?” And of course expecting to be taken to resorts, restaurants, etc during a visit and to have the bill taken care of.

How to deal with the pasalubong mentality?

Like always, this isn’t meant to be a criticism of Filipino culture, or a “Aussies know best” rant. This is purely cultural, and cultural differences can be confusing and can cause misunderstanding when interpreted according to our own cultural conditioning. If you grow up having been taught to never ask someone for a gift, and you hear a kid literally demanding one? It makes the hairs on the back of your neck stand up. And if you grew up fiercely independent like most Aussies did, you find the concept of someone wanting to share in the wealth of others a bit of a shock. Aussies are proudly independent, and generally have a don’t-take-handouts mentality.

My wife sees her elderly parents. They won’t ever ask for anything, however they appreciate it when they’re given a couple of thousand Pesos. Mila gives as a sign of love, and they take it as just that. We used to visit my mum when she was still alive, and Mila would always try to indirectly stock her pantry without her noticing because she knew she would have said “No thanks, I’m fine!” if she had offered money or anything at all really. So Mila would place new bottles of shampoo in the bathroom, and “forget” when we left. She did the same thing in the food cupboard too. Well, my mother DID notice and no she didn’t like it. To an Aussie it means saying she can’t cope, and an Aussie would rather do-without than to take charity.

But as I’ve covered before, the Philippines is an interdependent country. People depend on each other, and they see no indignity in letting those who care about them take care of them when they need. And even if they have less need, the fact that someone remembers them means everything. Sadly though, greed exists and money can corrupt. And poverty combined with jealousy can bring out the worst in people.

Again, how to manage it? Try to see the difference between those who just enjoy that family-thing and those who are parasites and opportunists. Because yes there are those greedy users and abusers around, and every family seems to have a few. The more they get, the more they want. And try to educate them about the realities of your life and let them know that you also need to budget and live within your means just like they do.

6 comments on “The myth of the rich foreigner from Australia”