The moaning whining ugly Australian expat in the Philippines

I live in the Philippines. Yes, I’m an Aussie, but this is my home right now and I have no plans of going anywhere else. Yes, I like meat pies and yes I have an Aussie bluntness and “innocence” about me which is part of who I am. But this is home, and I love my home. I love the Philippines and Filipino culture. My wife is here with me, and we have a house full of noisy kids (semi-adopted and “borrowed”). We have staff in the office and staff at home. It’s a full life and I love it here! Yet there are some ugly Australian expats here who do nothing but complain.

Are the majority of ex-pats like me? Are most quiet family men who get on with living a good life, or are they “the other type”? No idea. What I do know is that the ugly expats seem to be more vocal, more’s the pity! 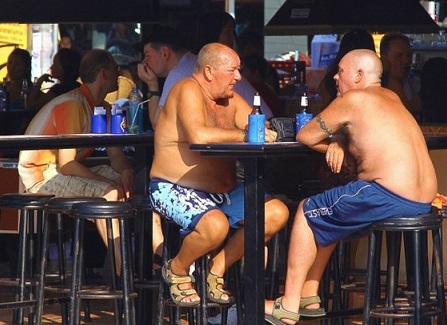 Who are the ugly Australian expats?

You will meet them on Facebook particularly, and probably on Twitter and other social media. You will find webpages and Facebook groups devoted slagging off the Philippines and Filipinos in the most shameless and insulting way possible.

Remember the classic “whingeing pom” in Australia? This is aimed at the ol’ blokes out there, so don’t get too rattled if you are under 50. This was the 10-pound pom who arrived in Australia from England and started complaining the moment he arrived. The response was “If you don’t like it? Why are you here? Go home!” Invariably they stayed, because they actually liked where they were. But it didn’t stop them complaining.

In the Philippines? You find the ugly expat has often been here for 8, 10, 15 years! And it’s not just Aussies. Americans, and those from Great Britain complain just as much as those from Great Australia. Why do they stay if they don’t like it?

I don’t know if I’m different to most, but I’ve always been a forward-looker. I never retrace my footsteps. If I was to go back to Australia, it would be to somewhere else in Australia and to something different to what we had before. More likely it would be to a different country altogether, but for now I’m pretty happy here and I’m settled. Life is good. And if it wasn’t? I’d MAKE it good! I have little time for whingeing and doing nothing to make things better.

The ugly expat – What is their problem?

Most of it seems to me to be expecting things to be the same as they are back in Australia. Always comparing. Always “Back in Australia we wouldn’t stand for this!” The food isn’t the same. The traffic is worse. The people in shops take too long. The queues are too long. The staff I employ, or the tradesman I hired, they don’t understand me. The relatives are always dropping in.

Well, the food is generally cheaper and is often very fresh. There is more traffic, but minimal road-rage and people will let you cut in. The people in shops would bend over backwards for you. The people in queues are patient and still smile. The staff are kind and tolerant of your moods, and the tradesmen don’t have 6 month waiting lists and are often very creative. The relatives are generally kind and loving people. But Mr Whinger never sees this!

Many an expat who settles here is a social misfit where they came from, and often a bit of a financial failure. The appeal of living in the Philippines is that the dollar will stretch further. Many have scant savings and/or live on pensions and modest superannuation. They don’t have a wealth of friends and great family back in Australia keeping them there, so this is a new start. And I suppose in most cases, unless you deal with a problem by facing it, it will catch up with you later. If you are a social misfit in Australia, you will be one in the Philippines too!

And if you were a failed businessman in Australia, you don’t have much hope trying to make a go of it here either. And even good Aussie businessmen can fail miserably here because they don’t see that they are walking into an entirely different work environment and market. Competing head to head with locals is rarely a good idea. Please read THIS ARTICLE from the Down Under Visa site about this.

If an expat is struggling to make ends meet here, it’s not so easy to keep smiling either. Do your homework before you move here, and try to live here for 12 months before buying houses etc. Set a realistic budget, then add 50% to it.

And if your relationship is weak in Australia, don’t expect that the Philippines will transform your lady back into the sweet and attentive lady you think you deserve. Again if you have problems in Australia and you don’t face them, they will only follow you here.

And if the problems DO follow you here, it’s grossly unfair to blame the Philippines for them!

The lure of pretty women in the Philippines

Sad fact is that the answer to the question of “If you don’t like it, why do you stay?” is often that the expat is here for one reason, and that is to live out his boyhood fantasy of having a smorgasbord of pretty women lined up for him. “Chasing the skirt”, as they used to call it.

Walk around SM and give your number out to every pretty saleslady you see. Head to the bars and believe the nonsense about how handsome and young you look. You can get plenty of female attention, but it will all be about the contents of your wallet. I had a client once who wandered into SM on day…..chatted up saleslady and told her he was looking for a wife. She spent the night in his hotel that night, and they fronted up at our office the next day saying they were in love! Wake up Australia!

What I know is that if my wife had been working in SM when she was single, she would never had let me or anybody else chat her up and whisk her off to bed. She would have burned holes in my retinas with her icy stair. I would “pity the fool” who tried. But anyway, this isn’t dating advice. Just pointing out that if a man comes here “thinking with the wrong head” then their life will end up fairly unstable. These are the men who end up being scammed often again and again, and who do they blame? Yep! The Philippines and all Filipinos. “The women are all no good, and they only want your money!”, they will tell you. Funny, but I don’t see women like that in my own daily life. My wife is wonderful, and my daughters are growing up very nicely. Even our female staff are decent ladies with good morals, as are all my sisters-in-law.

Anyway, as I said, I love it here. The people are wonderful and kind, and I suppose that most of the things I like here stems from that. If you want to live here, or just to visit regularly, try to concentrate on the good things and be nice to people. Act like a loud, boring pig and things will not generally go your way. And don’t expect your problems in Australia to magically disappear here.

Jeff Harvie is a Registered Migration Agent and proprietor of Down Under Visa in Manila. He has lived here for a number of years with his wife and kids.