Life’s A Beach – Life in Philippines

Jeff HarviePosted on 26/03/2016 Posted in In the Philippines

When we think of the phrase, ‘tropical paradise’, we usually include blue sky, green coconut palms fringing a white sand beach and gently lapping azure blue water so clear you can see the fish darting by. Sadly, for many beaches in the Philippines, this is not the reality. So what should you expect? 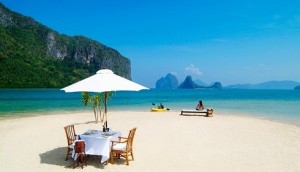 We need to remember the islands were formed through volcanic activity and without going into a geology lesson, a lot of the foreshore is sharp, foot slicing volcanic rock bordering mangroves that block the sea, the breeze and leave a mud flat at low tide rather than white sand. That is very much the case on the eastern side of northern Cebu; whereas the western side has open exposure to the sea with a broad, shallow expanse of sand often left exposed at low tide. Then, about two or three hundred metres offshore, the reef drops off dramatically. This has an effect on property values as the western side is more desirable for several reasons.

First of all the worst weather comes from the east, so the western side is a little more sheltered. The mangroves along the eastern side do protect the foreshore from erosion, but too often they have been cut back or harvested and the exposed foreshore simply gets washed away next time there is a major storm or typhoon. On either side, the low tides can be very low and while that allows for foraging of shell fish, sea weed and other seafood, it does make it tiresome to wade out far enough for enough water to swim in. High tide, on the other hand, usually means you can step right into deep, cool water right off the seawall.

White sand beaches like those at Boracay, Malapascua and elsewhere are more like what we take for granted here in Australia. Bounty Beach on Malapascua, named after the famous chocolate bar, is a classic white sand beach. It runs probably half way around the island, but the topography on the other side changes to volcanic rocky drop offs and the odd inlet. Nonetheless, it is the stuff dreams are made of.

All across the archipelago you will find sandy beaches; but not the white sand type dreams are made of. In Olongapo, Subic Bay, the sand is a lot more yellow to brown and nowhere near as fine as that on Boracay. Further north at San Fernando La Union, white sand beaches are few and far between, at least this writer hasn’t found any so far. I have driven all over the islands as part of my job when I worked for UTP Maps and I have to say most of the foreshore was anything but Boracay-like.

None of which should prevent you from enjoying a day at the beach, or foreshore, or rockface; whatever gets you close to the water. Just remember that the closer you are to a major population area, the poorer the water quality will be. I would never swim in Manila Bay and prefer to hop a banca across to Puerto Galera rather than swim off the Batangas side. The same for Mactan and Cebu. Better to distance yourself from the city, the industry and get out where the water sparkles.