Home › Cultural Problems and Misunderstandings › Let’s eat! Food and sharing in the Philippines.

Let’s eat! Food and sharing in the Philippines.

Come across a Filipino eating, and they will normally say “Let’s eat!”, or “Kain tayo!” in Tagalog. It’s an invitation to join them to eat, and typical of Filipino generosity. What should you do next time this happens to you? A necessary education for those in an Australian Filipina relationships. 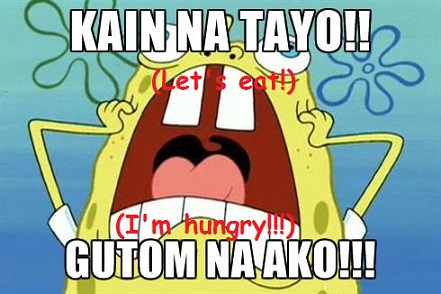 First time someone said “Let’s eat!” to me, I didn’t know what to say. I’d already eaten, and wasn’t sure if I was supposed to go and join them. But this is what Filipinos do when they’re eating and there’s someone else around. It’s almost automatic.

And I can remember another time on Bantayan Island many years ago where one of the locals invited me to come and drink with him and his barkadas (mates) after I bought him 3 bottles of the dreaded Kulafu (tastes like drain cleaner and cost P3 per bottle at the time) so he had something to offer his guests. Gave me a stump to sit on, a glass of this amazing beverage and a lump of pig fat. Fortunately I was able to discard the fat by tossing it under something without anyone seeing me, but I struggled down the drain cleaner.

But yes, as I said, Filipinos and generosity/hospitality go hand in hand. Eating by yourself and being oblivious to the needs of others, it just isn’t done. So whether you have an abundance or whether it’s something very humble (like that awful lump of fat), you offer it to whoever is present.

Try this little exercise next time you see a Filipino eating something. Ask them what they are eating. And guess what they will do? They will immediately offer some or even all of it to you, without hesitation!

Do you know that when particular religious groups come knocking at the door, your average Filipino will invite them in and offer them refreshments? They will do this even if it means they need to politely sit through attempts to convert them, because it would be rude to treat a guest any other way!

Does that mean you need to stop what you’re doing? Is it rude to say no? No, not at all. You can always politely decline, and no one will be shocked. And if there’s not much to go around, I’m sure they’re just that little bit grateful to hear that you’re busog (full).

Know what’s a bit odd? OK, what do you say if someone offers you something in Australia and you don’t want it? Someone asks “Djawannacuppa?” or “Djawannavegemitesanga?” (I’ll let the Australian husbands explain those) or similar? You say, “Oh, no thanks.” Or “Not at the moment, but thanks anyway” etc. In the Philippines? You sort-of screw up your face and say (in a slightly evil-sounding tone) “I don’t like!” You can imagine my shock first time I heard that! You could think of asking “You don’t?? But you had some just before?” Answer? “I know, but IIIIIIII dooooooooon’t liiiiiiiiiike!” Yes, it means they don’t want it right now! Not that they really detest that particular food or beverage!

Food is an important thing in the Philippines, obviously stemming a lot from the fact that hunger exists and many live day-to-day. Could well be nothing but rice for dinner. So food is definitely life, and sharing keeps people alive. Having guests over means food. Birthday celebrations means food. Baptisms, weddings, funerals and of course the Barangay Fiesta. First one I went to? Fed beef caldereta at every household I was taken to. Told each lady-of-the-house that hers was the very best and won a few pogi-points. Thought I was going to burst! Again, all about sharing. To shut the door and keep the hungry out would never happen.

I can remember a time in the distant past where I was visiting *cough* former girlfriend in Cebu. I don’t know what it is about Cebu, but the lechon manok there (barbequed chicken) was absolutely delicious, and nothing like we have in Luzon. So what did I do whilst staying with her at her parents house? Get a single chicken, and we would eat it. Get enough to share with the parents? Never crossed my mind. I almost wince in embarrassment to think of this now. Shudder to think what they must have thought of my lack of manners.

Confusion works both ways, of course. I recall a couple we knew years ago, with the lady being an old friend of Mila’s from Hong Kong. Arrived in Australia and complained to Mila that her husband never “offered her food”. She expected him to say “Let’s eat”, etc. and he didn’t. It’s not that she wasn’t welcome to eat. He just didn’t see the point in saying that to his wife, when he expected her to make herself at home and not wait to be asked.

Mila would also be amazed if we visited an Australian’s place and find they’d only made one main course. In Australia we ended up getting a new table, because when we had guests the table and the kitchen bench were full to the point that there was no room for anything else. No chance of actually eating at the table, because there was no room. And at one stage (I’ll get into trouble for this!) a party meant her getting up at 4:00am and becoming a complete food-nazi to everyone in the house, and after the guests had left (along with their doggie-bags of baon), those household would be left with shattered nerves and leftovers to eat for the next week or more. I’ve calmed her down a lot since those scary days, but no one is ever left hungry rest assured. That’s the Filipino way.