Jeff HarviePosted on 10/03/2016 Posted in In the Philippines

Vehicle registration plates, number plates, rego plates, license plates, tags (as some Americans refer to them) are something of an interest to me when I travel overseas. I recall one road trip across the top of the USA on I-95 from Wisconsin to Montana that netted 23 different state plates on cars we passed. Driving around the Philippines you can tell if a car is from a different region just by the first letters in the series. Or rather you could. Things have changed but it’s not for the first time. 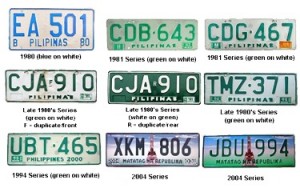 A few years ago a contract was given out for the manufacture and delivery of new registration (also called license) plates for all Philippines vehicles. A Manila based company, Power Plates Development Concepts Inc, joined forces with a Dutch manufacturer, J.Knieriem B.V. and known as PPI-JKG, to make the new series of plates. Private cars would have black on white lettering and PUVs (public utility vehicles) would be black letters on a yellow background. Gone are the green on white, the hologram stencil of the Rizal Monument and other features designed to make it difficult to produce fraudulent plates.

The new format uses LLL-DDD (ABC-1234) for 4 wheel vehicles and LL-DDDDD (AB-12345) for motorcycles. Government plates will be red on white with the relevant department the vehicle belongs to stamped on the plate. Changing to the new plates will cost owners P450 and of course, was supposed to be conducted by January 2015.

As this is written there are over 600,000 new car plates lying abandoned in the Port of Manila thanks to non-payment of some P40 million in import duties. These plates will likely be auctioned off if the contractor, PPI-JKG is not able to pay the outstanding duty. Back in July 2015 the Commission on Audit stopped the LTO from paying P3.4 Billion remaining to the company after the initial P477 Million, citing questions of doubt over the legality of the contract and bidding. The LTO says PPI-JKG is trying to pay the duty but without the remaining payment, is short of cash.

Meanwhile, thousands of new vehicles are driving the roads with temporary plates. So what’s new? What I don’t understand is why they had to outsource manufacture in the first place? Why is import duty levied on such a product when the money could be recouped by paying less overall for the contract? So, next time you are in traffic, have a look at the license plates on the vehicles around you and fill in the time you wait in ‘bery trappik’ musing over this latest in grand scale fiascos.