I’m an Aussie. I grew up in Australia in the 1970’s when everyone spent their summers lying on the beach trying to get a suntan. They used suntan lotions (see the link before) to try to get brown skin. We thought it looked healthy, and no one wanted to be pasty and white. It was embarrassing when summer came around and our skimpy shorts showed our white legs! Remember?

Well, I don’t know about you gents but I found some of the prettier girls here had the yummiest brown skin. They looked good enough to eat! And then shock, horror! They would say they wanted to be white, for goodness sakes! They would describe themselves and others as “berrrry bluck!” 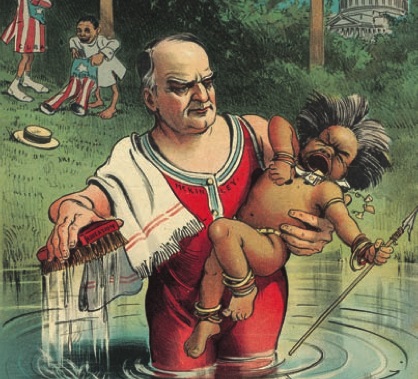 This is how America portrayed their “little brown brothers” (in need of a bath), which is part of the cause of the white skin obsession!

Why do Filipinos want to be white?

Filipinos didn’t invent the fear of being “black”. Indians also desire whiter skin. And no doubt it would have been an issue amongst the Americans of African descent once upon a time too. And the Japanese used sunscreen lotions for hundreds of years.

Ask a Filipino, and you won’t get anything too profound. You’ll just get that they don’t want to be “black”, as this will make them “ugly”. No one these days thinks of the reasons behind it. They just accept that white is better.

But it stems from two different areas:

The colonisers were white

In the more recent history of the world, the colonisers and the conquerors have been the white people. The English ruled a large portion of the world in various times. India, China, Australia, America, Canada, large portions of Africa and umpteen other places. The US had a go at colonising when they took over colonising the Philippines from the Spanish in 1898. They politely referred to Filipinos as their “little brown brothers”, but also as “natives” and another “n-word”. Dark skin meant being inferior.

So the power and the wealth was with the white people. And the whiter your daughters were, the more likely one of the elites of society would marry her and breed the colour out of your gene pool! The kids of those liaisons had a greater chance of a good life because of their whiter skin.

Filipinos still get changes in skin tone from sun exposure, just like us white folk. They can tolerate a bit more, and sunburn is rare. My wife Mila went to the pharmacy looking for something to treat my sunburn once, and they had nothing there. They suggested slices of tomato! They do still get darker if they are out in the sun, though. Look at the local police, traffic enforcers and security guards. Normally as black as Africans!

So, being “black” could mean you do menial tasks out in the sun. Being white means leading a more comfortable and privileged life.

The desire for white skin

Even though there are no more white colonisers, “white is beautiful” is ingrained as part of the culture. The girls AND the boys all wish they were whiter, and the beautiful people (TV stars, music stars, models, etc) are the whitest Filipinos. And anyone who is half/half Filipino and foreigner stands a good chance of attaining stardom because of it, eg the barely-talented James Reid that my daughters all want to marry one day. Korean “K-Pop” stars are popular because of their white skin too.

And the dreadful skin-whitener products sell like hotcakes here. Anyone who can afford it will slather this rubbish on and will watch as their skin gradually becomes fairer. I’m not sure what the stuff does, but you see faces taking on paler shades than the rest of the body. It starts to look quite strange. What I do know is that it removes the natural sun protection and sunburning can leave scars on the face. If you see a lady who looks like she has a moustache of darker skin, it was probably due to abuse of this garbage. Scars on the cheekbones under the eyes are also common.

We’ve always had staff members cover their heads with towels when they’ve brought in the washing from the line, and no one but a few younger kids will want to use the pool in the heat of the day. We’ve had kids spend their holidays here, only to see the looks of horror on their mothers faces because they’ve become browner during their stay.

Personally? I’d like to see a bit more national pride, especially when it comes to appearance. Being white-as-a-sheet makes sense in Scandinavia, but not in this part of the world. Being Filipino means having a lovely and delicious skin tone. It also means having a “flat nose” instead of a great big thing with a sharp point on it. It means looking better at 45 than many an Aussie white woman looks at 35. You will never hear me praising white skin, and I long for the day when Filipinos appreciate what God gave them. Time to stop envying the old colonisers!