Filipino single mothers and their kids in the Philippines

There are plenty of Filipino single mothers. You find that one out fairly early in the peace when you have anything to do with the Philippines and Filipina girls. Lots of single Filipina ladies with kids. And in most cases, the biological father isn’t in the picture and doesn’t really care very much. It’s very unusual to find an involved Filipino father of a child when the couple didn’t marry. He sows his wild oats (as all good macho men do), and walks away from anything resembling responsibility. 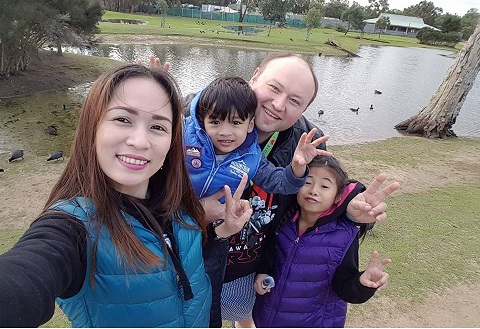 So as a result, you will find plenty of Filipina single mums out there with kids who would love to have a good husband. And more than that, they would love even more to have a father of their kids.

I put that word above into inverted commas, because I detest it. I detest its meaning. “Legitimate” means “real” or “genuine”. The word infers that the child is somehow fake, and I can’t abide by it. Yet, the Philippines tends to use some fairly archaic words and no one really means it that way. Certainly not these days. Never seen a niece, nephew or grandchild treated as in any way lesser because they were not born in wedlock. Kids are generally much-loved within Filipino families.

Only odd thing I’ve noticed over the years is that whilst a man may marry (or live in a de facto or “live in” relationship) with a single mum, he normally doesn’t bond particularly closely with the child that is not “his blood”. You will notice and sense that this child is often on the outer, and never fully accepted by the new dad. He will do the basics, but the kids he fathers will be his pride and joy and not the other child or children.

This view seems to vary. In our Migration Agency practice, I see a lot of kids being left behind. Lots of Filipina single mums migrate to Australia with Australian men and the kids stay behind with the grandparents. I can’t really comment, as it’s truly none of my business.

But I do always smile to myself (fairly broadly, usually) when I see a Aussie man taking on a child or even multiple kids. So far this month we’ve had one good man take on two kids and another take on three. And on our Philippines To Australia Facebook Group I see some recent photos from a nice Aussie bloke with his new wife and the two Filipino kids that he refers to as “his kids”. I think that’s about as fantastic as fantastic can be. A ready-made family. What could possibly be better?

I did the same thing myself, which those who know me reasonably well would already know. When I met my wife Mila, I set my expectations clearly right from the start. I said there would be no “step-parents”, and that her daughter would be my daughter and I would expect her to be a mum to my two sons. I was, and she was. There was never any question about this. If you want to be a proper family, you really need to do the same. You will have nothing but a source of conflict if you don’t, ie. if either of you get protective and possessive about “my kids” or shows disdain toward “your kids”.

How do Filipino children accept a new dad?

I’d love to say that it’s all sunshine and flowers, and that every Filipino child will run to your arms and love you as their new dad from that moment. But it has its challenges. It will especially have its challenges if the former single-mum doesn’t insist absolutely that the kids fully accept the new situation. If she tries to continue the former-family within the new family, the transition will be slow or it simply won’t happen at all. No one wins when that happens.

Marriages require give-and-take. You change…..your spouse changes. That’s how it works. Mila and I are vastly different people to the couple of lonely 30-something single people who met each other all those years ago when she was an OFW in Hong Kong. And I sincerely thank God for every one of those changes, as does Mila. If you don’t want to bend? Then stay single! I mean it!

And that means insisting that the kids go along with the adjustment and accept their new life with new dad has begun, and old life in the Philippines is over. A new chapter and new realities. And I mean the same for any Aussie kids too. My eldest son? He didn’t want anything to change, and if he could have stuck Mila (and definitely 9 year old Remy!) back on a plane by pressing a button, he would have done so in a heartbeat. But he didn’t control that button, and he knew it. Jeremy (the Down Under Visa office manager now) found he had less jobs to do and more variety of food to eat, so he was happy. He hasn’t changed much either!

Will the kids always love you? Will they always appreciate every little thing that you do for them? Do any kids? None that I’ve ever met! I have six kids living here (plus one who’s 19 but still acts like a kid). I have one off at college. I have Jeremy who’s too big and ugly to live here now, and has his own man-cave. Yeah, they love me. They know they’re fortunate. But they can be selfish and thoughtless, as can any kid. But that’s not why you take on kids. You love them unconditionally. That means “no conditions”. That means you love them even if you would like to throttle them. They will never love you as much as you love them, and one day they will move on and you will matter even less. And that’s the way the world works. But you are doing a good thing, and that’s what matters. You do good for the sake of doing good, because that’s what doing the right thing is all about.

I hope a few more of you can take on a Filipina single mum AND her kids. I’ve never regretted it, and I’m sure that neither will you.