Jeff HarviePosted on 21/08/2016 Posted in Cultural Problems and Misunderstandings, In the Philippines

Filipino personal grooming is a bit….well….different to what I grew up with. Not sure what young people in the cities in Australia are getting around doing these days, so I might be writing this as a 50+ Queensland-style Australian male and might be missing a few things. But it’s definitely different. And yes, this is meant to be light-hearted and not critical. 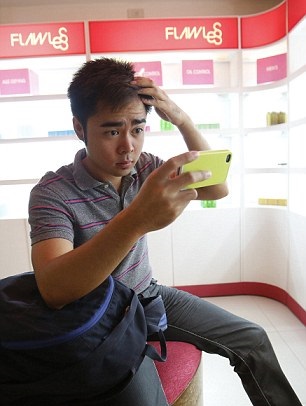 I grew up in as a kid in the 70’s in Australia with that standard “Beatle” hair that all Aussie kids had at the time. Comb it straight down, and that was it. When I was a grownup of about 20, I started parting it. 30 years later, my hairstyle hasn’t changed. Never did the Mullet or the Flock-Of-Seagulls in the 80’s. It’s hair. I comb it. I get it cut when it wants to comb itself. And when Jeremy was born, I grew a beard. It’s been there ever since, and there it stays…mainly because I hate shaving. And it will never be one of those sculptured “hipster” beards that are trendy these days. Nor will I ever have a “man-bun!”

Here we have a car with dark window tinting. When parked, young men of the Philippines will pass the car and they will check that their hair is looking right. Yes, seriously! If I look in a mirror, it’s by accident. Jeremy has no mirror in his condo unit at all, and sees no need for one. To me, that makes perfect sense. 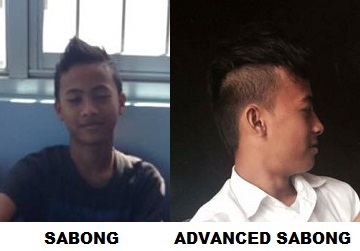 Fortunately my nephew Bryan is unlikely to see this!

I like the fact that Filipina girls still generally like long, straight hair. And it’s always washed, conditioned and combed neatly. Even those who live in squatter areas are still immaculate. I just don’t quite get the young Filipino chaps, but oh well. Maybe I’m just getting old.

Filipinos and nail and skin care

Once again, I grew up with the Aussie male using pocket knives, wire-cutters and occasionally actual nail cutters. I had a manicure here back in the 90’s. I was in a hotel. I was bored. What the heck. The nails needed cutting. They did that, then put some clear stuff on it. I assumed a cleaning product. Wrong! It was clear nail polish! By the time it had dried, it was too late. Mind you, I had nothing but compliments on them here! I was glad I could scratch it all off before I returned to Australia. But yes, that’s considered OK here, even amongst the ol’ codgers!

Skin? We had nephews here one Christmas. They asked Mila for lotion, because they all felt their skin was dry.

Never in my life have I ever woke up and thought “My goodness, I have such dry skin!” I’m not actually sure what dry skin is! I always thought it was dry when you’d finished with the towel after a shower! But apparently a 9 or 10 year old Filipino lad knows it needs lotion!

What I find very freaky is a group of young men together in a public CR in a mall somewhere, all congregated around the mirror and sharing male cosmetics! I don’t know what these products do. I don’t think I actually want to know! I’m still one of those men who feel that even acknowledging another man in a public dunny is a bit questionable. Use the trough. Eyes straight ahead. Maybe wash hands, as long as it doesn’t mean you have to wait too long and make your mates think you were up to something!

There still seem to be plenty of babies being made here, and the local girls seem to find these well-groomed young men quite appealing. So it’s probably just me. Looks like too much work to me. I’m of the “I have a client to see, so I probably should comb my hair” mentality, and I’m happy with that. And being an Australian man, my wife knows how stunningly handsome I am without any assistance from male beauty products. So I think I’ll stay how I am.