Jeff HarviePosted on 06/11/2016 Posted in Cultural Problems and Misunderstandings, In the Philippines

Unless you live very simply here in the Philippines, you will end up employing someone to help you out. Everything takes a long time here, and there are some tasks you would rather not do, I’m sure. So it’s fairly normal to employ staff. This can be a bit of a shock to the average Australian, because most of us have never employed anyone in our lives, and certainly not household staff.

But there is a way of doing this, and there is a way not to. Not easy for Australians, because we are used to a level-playing-field. We treat everyone the same, whether they’re the chairman of the board, or the one who cleans the toilets. We have a real aversion….almost a revulsion….of treating anybody as a “servant”. Even the word is fairly yuck! 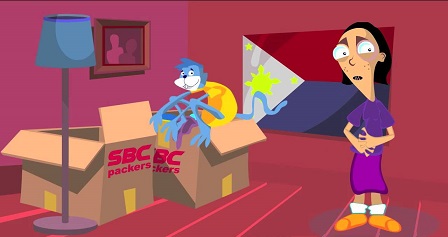 And if you move here and find you need to employ someone to, say, take care of your kids, or help with housework, or cooking, or laundry, or to employ a driver, then you will probably do something like I did. I’m sure I was waving the Eureka flag in my head somewhere, and had these grand plans of treating staff here as I would if I was in Australia. None of this “Sir” nonsense! And they could make themselves at home, and the playing field would be as level as the SCG!

Welllllll, Toto? We’re not in Sydney anymore! And assuming all will go the same as it would in Sydney or anywhere else in Australia, this will be met by some serious headaches.

How to Filipinos treat household staff?

I’ll explain how it works here, so you will get an idea what the status quo is in the Philippines. No one here treats household staff as equals, and no household staff expect to be treated as equals either. Most people refer to their household helpers as maids, servants or yayas. Many make them wear uniforms, even in public. They would never eat at the same table as the family, and they would probably be a bit hungry a lot of the time too. Diet would be pretty dull, with mostly rice and dried fish with a few veges tossed in.

We went to a pretty flash hotel in Manila last weekend. Saw a family sitting together in the bar, having a nice time. The two “yayas” were wearing uniforms, and sitting a long way apart and without even a drink of water. They would have slept on the floor in the hotel room, and probably slept on a bit of floor back at the house too!

How did the enlightened Australian treat household staff?

When we first moved here? No sir and ma’am. Young Jona called us Kuya and Ate, and slept in a bed in the same room as the kids. Ate at the table with us. And I would sit and talk with her if I wasn’t busy. What happened? She thought I was in love with her, managed to get the girls to do household chores while she relaxed, and ended up lasting 3 ½ weeks only!

First driver? I sat in the front seat with him. He ate meals with us. I’d have a few beers with him. Let him bring his child around. He lasted a while, until we realized he was taking the car for private errands, was stealing money, and a few other things.

The problem was that they had no mental point of reference, thus a silly little girl thought she had become a princess and a silly man thought we were utterly stupid and he could get away with anything. They had no concept of egalitarianism. There is a class-system here, and this is all anyone knows. If you don’t do the same, then you must be a weak pushover!

How to relate to Filipino staff

You have to accept that you’re not in Australia, and in most cases you can’t make friends with staff or you will get problems. Show too much friendliness (especially as a man with female employees) and their attitudes will change. Try to set a level playing field, and before you know it they will forget that it’s your house and you’re the employer. Work will slacken off and they will start taking serious advantage of your kindness.

And no, you don’t need to make them sleep on the floor or keep them hungry. My goodness, you need to be able to live with yourself. All of our household staff complain about how fat they’re getting. We’re VERY kind compared to most local employers. No uniforms. No belittling titles. No sleeping on floors, and plenty of good healthy food. Yes, they all call me Sir. And Mila can be pretty scary when she gets annoyed. But the kindness that underlies us trying to be tough still shines through, and it still leads to advantage being taken, eg.

Just a small sample. Probably something similar will happen tomorrow! If they were calling me by my first name, it would be much much worse! So be prepared to learn some new ways, and don’t try to be mates with your staff or you will confuse them and you will regret it.