The Competition For Your Flying Peso – Other Philippine airlines

Jeff HarviePosted on 08/05/2016 Posted in In the Philippines

So who are the other ‘PALs’? Of course you will have heard of, and probably flown with, Cebu Pacific. Started in 1988, they flew for the first time in 1996. Since then the airline has, since 2012, become larger than PAL. In 2008 it ranked 5th in Asia for budget airline passengers transported and was 23rd in the world. Cebu Pacific flies to Australia and also to the USA… well, Guam, but they have plans to go to Hawaii and L.A. 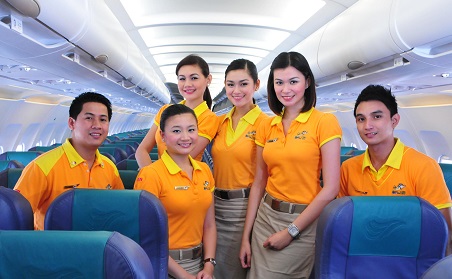 Cebu Pacific – and other Philippines airlines

Flying with Cebu Pacific used to be a fun experience. I recall my first flight, from Clark to Cebu in 2001. I won the in-flight games by having a passport handy in a breast pocket when they asked for a photo of yourself. I won a nice travel bag kit. Some years later, around 2010 the prizes were rather lame promo plastic pieces that weren’t worth the effort of digging out whatever they were asking for. I might point out that the last time I flew with them in 2013 from Singapore to Cebu they had cut out the games altogether, which was probably a good thing.

This is so typically Filipino, you have to pause a moment and appreciate it. All the name changes, take overs and restructuring; all the time passengers and staff messed about while the owners and share holders made their profits, took their dividends or copped their losses as the case may be. I was messed about in 2014 when Air Asia went through a reorganization. Basically my bookings for Kuala Lumpur to Cebu were cancelled and I now had to fly via Manila. No extra cost except I lost a day each way and had to pay for extra accommodation for one night. Not much of a problem except they advised me of the change by text. The first text, sent on a Friday, said the flight was cancelled. The second, sent on the following Monday, advised I was no going via Manila. Not impressed.

I could have flown with Cebu Pacific but I swore never to use them again after my online ticketing experience in 2013. They advertised flights from Singapore to Cebu for US$60 each way, per head. For seven of us that should have been a total of US$840. Then, once you committed to this and with no way of backtracking or cancelling without losing your money… they hit you for airport fees, fuel fees, security fees, booking fees, seat selection fees (though you couldn’t not select your seat if you wanted to proceed with the booking and you learned of the fee later) and so on. It pretty much doubled the final cost. I took this up with Cebu Pacific and got nowhere. Absolutely nowhere despite a lot of effort on the phone and by email. Keep in mind, this is my personal experience, my personal opinion and the owner of the blog has nothing to do with this but I am confident I won’t get sued for defamation given it is all true and I have a ton of proof to back me up.

Having said that, I have to admit perhaps we expect too much from airlines. In some respects they are transportation providers, little different from bus lines or ferry companies. They are more high-tech and of course they have stringent safety rules to adhere to but the end result is no different from any other mode of transport: you get from A to B. With the drop in costs with budget airlines it is reasonable to expect a drop in service. Long gone are the days when people dressed up to fly somewhere. It is no longer a thing of awe or a rare event. I only know two people who haven’t flown and they are related to me and my wife, more to her than me. The positive thing is that the airlines in the Philippines have a good safety record, which is something we’ll discuss in another article.